We finished talking about the central force model by summarizing how we could apply kinematics, forces, energy and momentum to circular motion. Talking about momentum with the central force model was new to me this year, but, if you think about the planet-star system as having no non-negligible external forces, then the center of mass stays at rest or at constant velocity. When the planet goes one way, the star goes the other way. Such an obvious way to see them both rotating around the center of mass of the system.

Then we drew force diagrams for this situation: 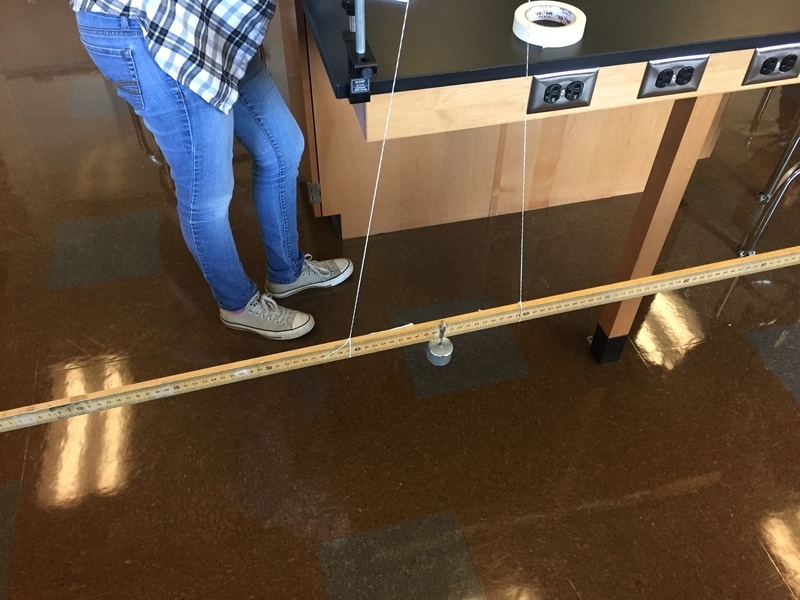 We broke the particle model. We need to model this meterstick as something other than a dot. Off to lab to figure out how to keep something balanced when we care about ﻿where﻿ the force is being applied.

The Mulvey Method helps students see what happens how something like the force of gravity changes when other quantities change. It's great for questions where all the answers look like ﻿F,﻿ 2﻿F, ﻿4﻿F, F﻿/4, etc. It's named after Hillary Mulvey, Brown '14, who came up with this technique.

Let's try it on an easy relationship.  If the kinetic energy of an object is doubled, what happens to its velocity? Start by writing the equation twice that describes the relationship you're studying, once under a column labeled NEW and once under a column labeled OLD. Then, under the OLD column, plug 1 in for everything, and I mean everything, that isn't the dependent variable in the situation. So your work should look like this: 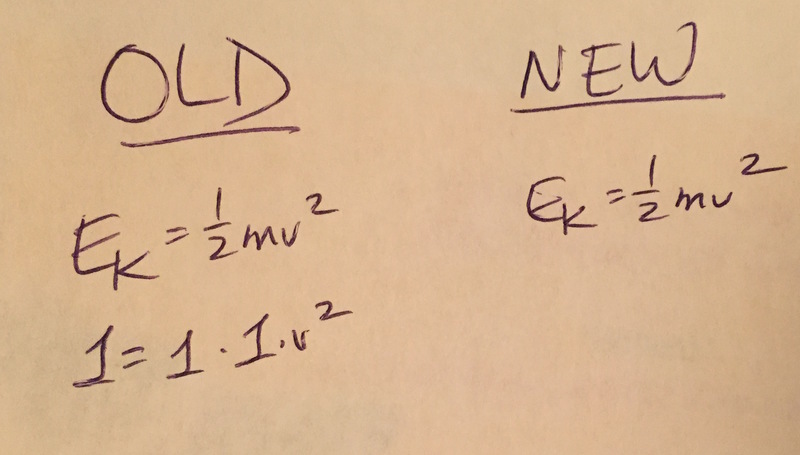 Yes, even replace the 1/2 with a 1. You're looking for the ratio between quantities before the change and after the change, so we set all the quantities, including constants, equal to 1. 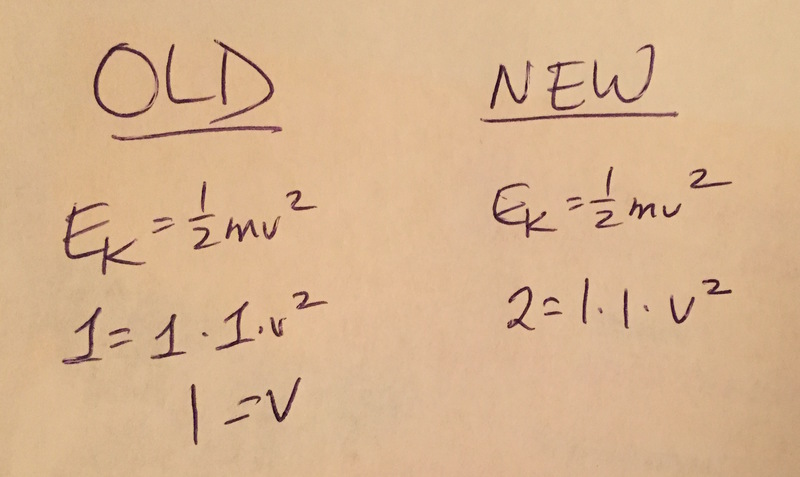 Now you can solve for v to be the square root of 2, and so the velocity is multiplied by the square root of 2. Now this technique isn't the most mathematically rigorous, but I've found it can help students figure out what these types of questions are asking, and, over time, they start seeing the relationships without having to resort to the Mulvey Method. I also found that when I try to do it a more mathematically rigorous way at the beginning, my students get confused by all the variables, but when I show why the Mulvey Method works in March or April, it makes perfect sense.

We also got to play with PHeT's Solar System simulation, using a lab I think I've done since 1998 in some form or another, starting with Interactive Physics software on the old fruit-colored iMacs.

We had shortened periods today due to the PSATs. So we were all a bit exhausted from testing. We used the PHeT Gravity Force Lab to make a model of the force of gravity; the dependence of the force of gravity on the distance between the two objects was hard to ferret out, but it worked nicely once we happened on a good curve to fit. That's about how we had time for today. 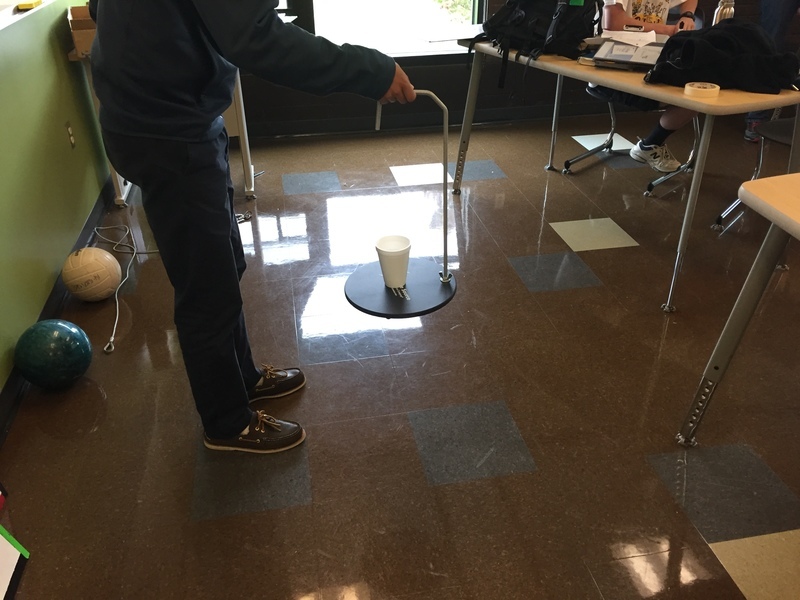 Thinking about circular motion is hard because we have to think in two dimensions. Those of us who were attached to positive and negative direction now need to think in terms of left, right, up, and down. It's harder than you'd think.

We played a new game today, a twist on the mistake game. I had groups of two put up two whiteboards, one with a mistake they thought was a good mistake. It turns about the best board discussions were around how to convince someone of their mistake. It also was great when students made two different mistakes on the two boards. I think next time, I'll ask the groups of two to make ﻿﻿a mistake in at least﻿ one of the two boards.

We played with the Greek waiter's tray (see above), which is always fun. I make my students go through a three-stage training with the tray: first, a soft object that's grippy like a foam apple, then a roll of tape, which seems to slide off pretty easily if they're not careful, and finally, for stage three certification, a cup of water.

We had a little time today to start talking about what would happen if you launched an object horizontally faster and faster from a little ways off the surface of the Earth. I got to draw Newton's Mountain on the board, which is one of my favorite visuals.

After our assessment on momentum and projectiles, we whiteboarded some questions about circular motion. The biggest thing that seemed to trip us up was whether the force that pushes you in a circle is another force that should be drawn on the force diagram or a force we already know from our interaction diagram. We also had a great discussion about how much kinetic energy and potential energy you have to give a satellite to get it into orbit. (This is another reason I'm happy I postponed circular motion & projectiles until after energy & momentum.) We ended by talking about the forces on banked curves. We did it just qualitatively, but there were many, many questions about it. 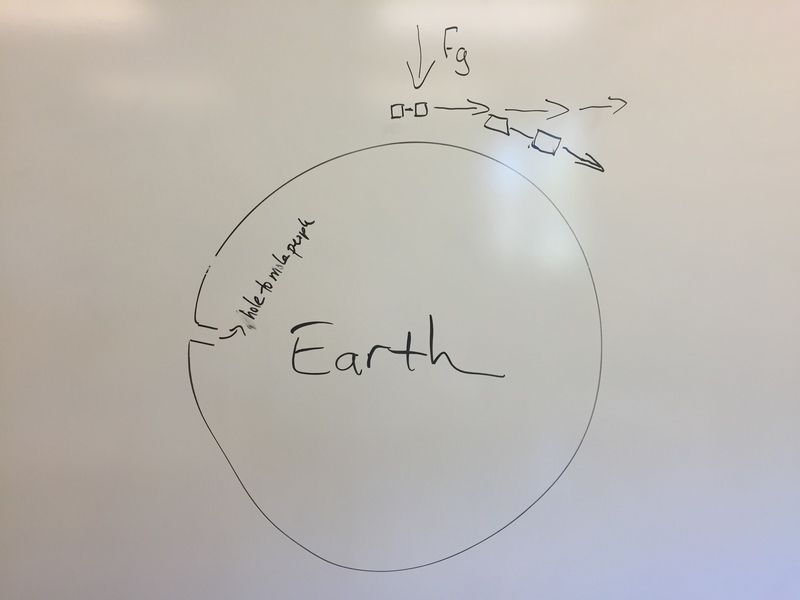