Yesterday, I finished grading the reassessment storm. It was a storm of the century.

OK, this is only my second year of using standards-based grading. I'm happy with it, but I feel I still have a few major changes to make until it works well for my students, allowing me to spend future years making endless tweaks to the system to polish it or try new things. But this year's SBG had a fatal flaw. The calendar.

I just counted. I had 208 standards reassessed. I only have 64 students on my roster. (Admittedly, 19 of those students have me for a double period every day, so I'm responsible for 83 credits being earned this year.) Most of them studied over break for the assessments. But since break seems long ﻿before﻿ you go on break but ends up being much more Netflix and Mario than you thought, many students weren't prepared for the 12 or 14 standards they thought they'd reassess in a week. Many of the reassessments just confirmed their previous ranking on that standard.

And, on the bright side, I have a lot of good assessments, and a few that I know that aren't that great.

We talked today about how to approach a free response question.

I've found that many students don't want to read the problem but will study the picture. So I came up with the scratch-out technique. As you read the text in a question, scratch it out if you can see the information in the picture. If it isn't in the picture but you can add it—phrases like "frictionless" or "starts at rest"—then write it on the picture and scratch it out. And if you don't know what the words mean or if you don't know how to add it to the picture, then circle those words. That way, you won't have to read all those words ever again. This helps give students a purpose in their reading and makes them read the question closely. 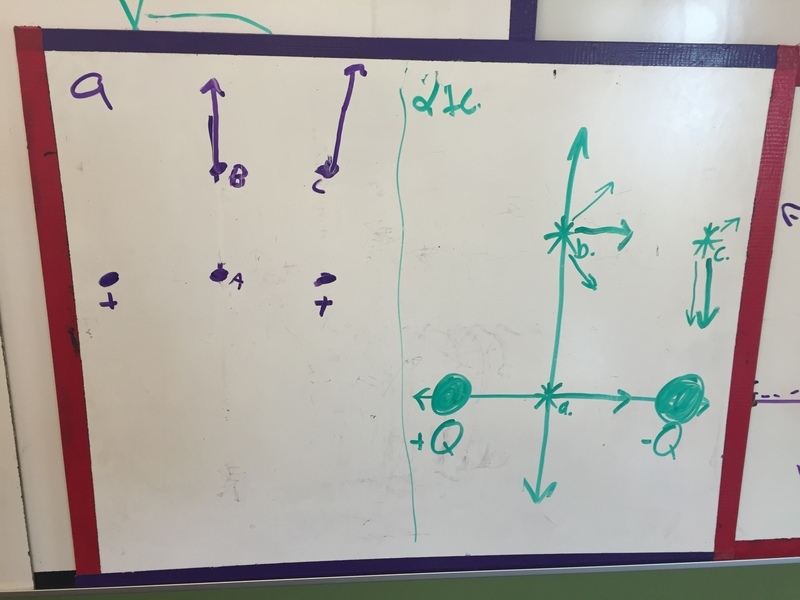 In groups, we derived the equation for the electric field around a point charge. It wasn't that bad, and it let us have some really great discussion about what the variable ﻿q﻿ means in different situations. What makes ﻿﻿﻿q₁ ﻿different that ﻿q₂﻿, ﻿q﻿, and ﻿Q﻿﻿? It was a good discussion about what variables mean.

We also got really good at drawing the direction of electric field lines. I couldn't even think of any good questions to ask them.

When we were reviewing for the exam, I spent a lot of time talking about ﻿conscious competence﻿﻿﻿. We will go through the steps, we'll know the steps are right, and yet, still, at the end, we're sure we made a mistake. It's not uncommon. We all have our physical intuition be at odds with the models of physics all the time. But it's a new feeling for first-year physics students, so I spent some time explaining how it's normal. It's worth doing what you know is right, even if it isn't exactly what the question asks, than sit there and do nothing. Get involved with the problem. Figure out the situation really is. The more you think about a situation, the easier ﻿any﻿ question about that situation is.

I also got a very clear reminder that students don't learn at the same pace when a student asked me how to read numbers aloud that are bigger than nine thousand nine-hundred and ninety-nine. I drew this picture, and he got it almost instantly: 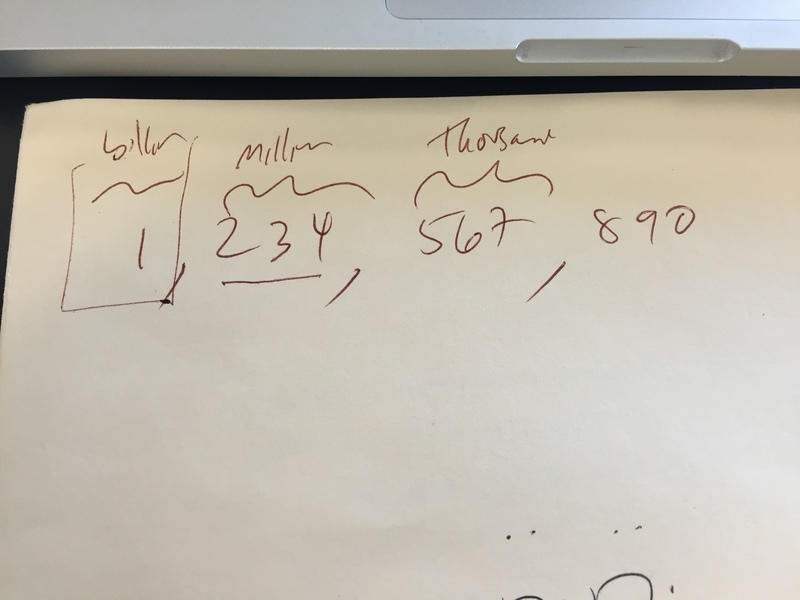 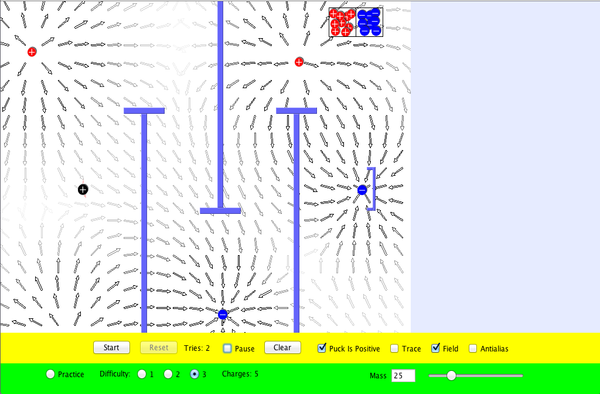 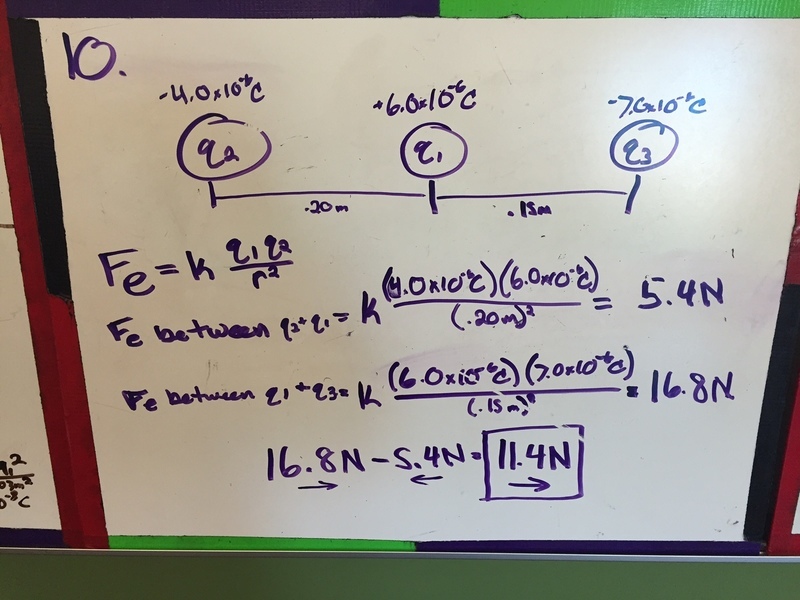 Today was just a test and quick whiteboarding of a few problems. The biggest point we talked about what that all we know about unbalanced forces work with electric forces, too. 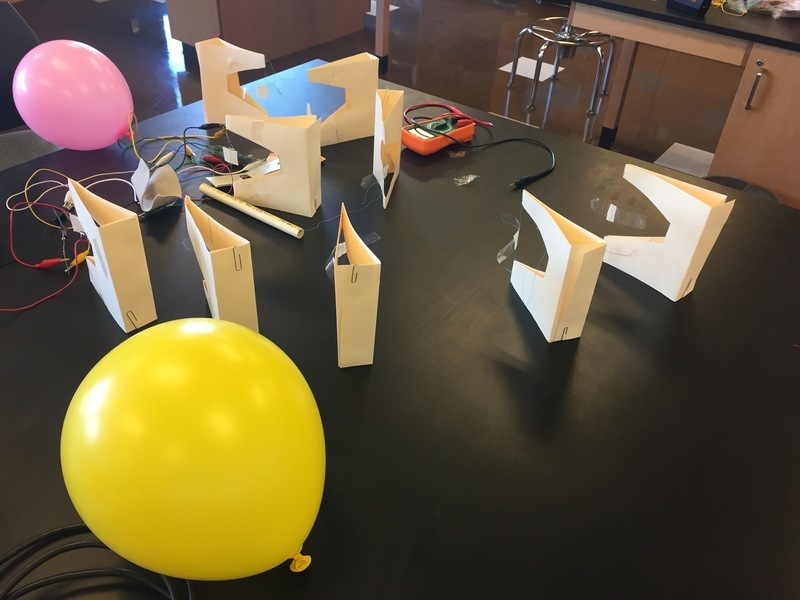 It was our first day back, and I wanted to give them some time to rejoin as a class before we jumped in. I allowed them to tell "cow" stories, which are those somewhat random stories that students tell that only seem tangentially related to what we're talking about in class.

Then we reviewed a little bit about polarization and charge separation. Then I introduced the last concept for circuits: what happens when you put an insulator between the two plates of a capacitor? We used the PHeT simulation again to visualize what's going on, and we summarized our results. Then we worked on some problems together. It wasn't the most productive day, but I feel we gelled back together as a class, and that's important too.

We went over charging by friction, conduction, and induction today, and then it was time for the fun.

First, we did Fresca soda can races. Using a charge object, get a Fresca can from the start line to the finish line quickest without ever touching the cans. (Fresca cans seem to show charge separation better than all the other soda cans, for some reason. When I used to use lots of different types of cans, the team with the Fresca can always one.) It used to be that straws would work, but this year, rulers, rabbit fur, and styrofoam plates were used to accelerate the Fresca cans.

Then, we played with the van de Graaf machines. They weren't as much fun as usual; it was too humid in December in Ohio. 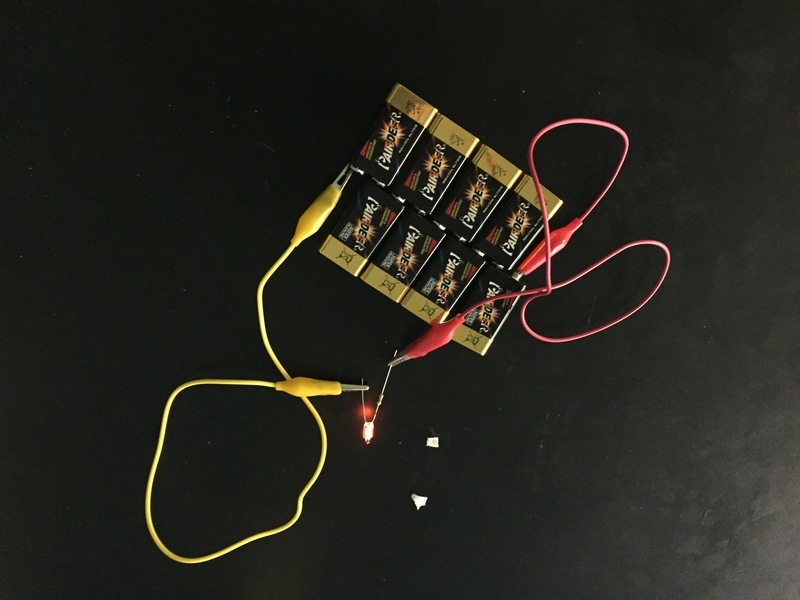 Today we learned about the various ways an object can become positively or negatively charged. We knew about friction from yesterday, but what about touching? And what about the weird way an electrophorus becomes charged? We experimented, and we used neon bulbs to be able to show which way the charge was flowing. 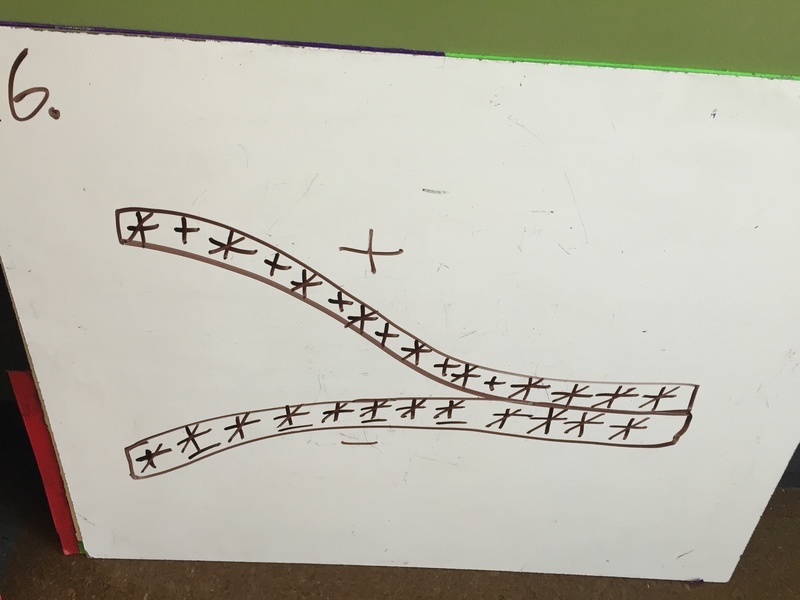 How do the top tape and the bottom tape go from uncharged (or from balanced charges) to a positively-charged top tape and a negatively-charged bottom tape? We visualized that process today. We also wrapped up the last question on capacitors today, which also helped us review Kirchhoff's two laws.

Then, it was on to the electric force. I've had students do curve fits for this force before, but I didn't this year. I decided I wanted to introduce this equation quickly today, and let students tell me the similarities they saw. Boy, did they see a lot. We talked about how the force looked like the universal force of gravity. We wondered how Newton's Third Law worked with this new force. We asked about how we know there's only certain values of charge found in the universe, and doesn't that contradict what we learned about the internal structure of the proton? I had to explain that, in a proton, if you try to pull those parts apart, the force gets bigger and bigger, and it takes so much energy that it just creates a new particle. How does it create a new particle, they ask? I heard some murmurs, so when I put up the equation E = mc², I was expecting some gasps. Instead, class turned into the Jerry Springer Show for a minute. That's a great, nerdy feeling.

It's a bit of jumping around, and next year, I'll try to make it smoother, but something made me want to try teaching all the AP Physics 1 electrostatics stuff first and then delve into AP Physics 2 material. Tomorrow, we'll talk about the ways we can charge things without using friction.