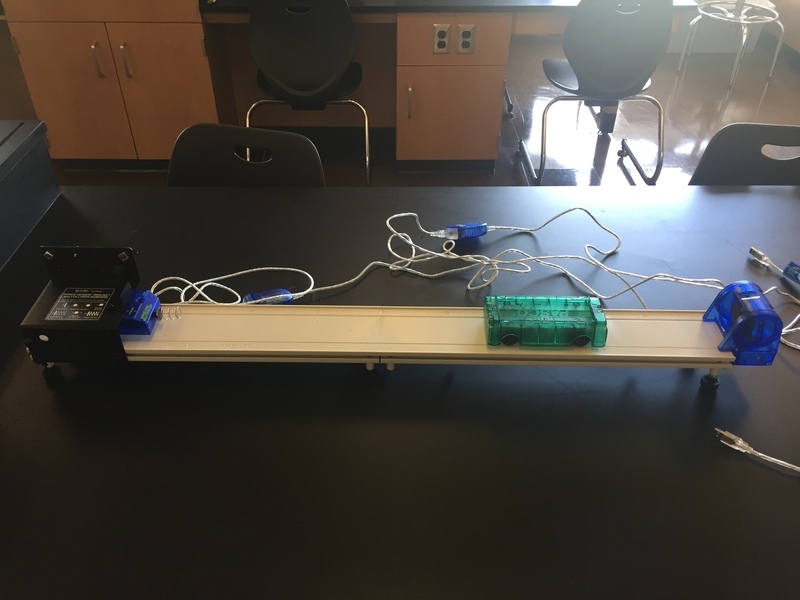 So, after a day of learning that the slope of the momentum-time graph is the force, and another day when we figured out the area of the force-time graph gives you the change in the momentum, we were ready to put this model to use.

So, following in the footsteps of the LOL diagram, I use the SOS diagram. The name will make more sense a little later.

Remember, my students have done balanced forces yet. They only know that a force is a push or a pull and is the slope of the momentum-time graph. I start by introducing interaction diagrams.

First, we make our first interaction diagram together as a class. We use the setup in lab as our situation. (I took a picture of the setup and posted it at the beginning of this post.) We start by listing all the objects we care about and putting them in bubbles. Then we connect the objects that interact with lines. Usually, to interact with an object in a physics sense, that is, to put a force on it, you have to be touching it. There seems to be only one exception we have right now, and that would be the Earth. It seems to push everything around, even when we're not touching the Earth. I mean, that's why babies are FASCINATED by dropping objects from high chairs. "Look!" they seem to scream. "This object is being pushed around and NOTHING IS TOUCHING IT." We aren't usually as impressed nowadays that we're older, but we should be. Anyway, here's what the interaction diagram looks like: 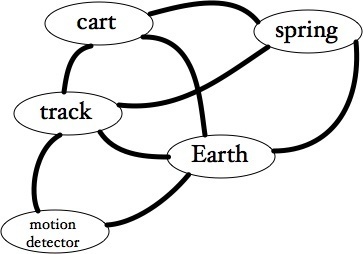 So, we have our equation here, in picture form: Initial momentum + change in momentum = final momentum. Or, since change in momentum is the area of the force-time graph, and the simplest way to calculate that area would be a rectangle where the base was the time and the height was the average force for the situation, we can write it as...

So why is it an SOS diagram? The O is for the system schema in the middle (which I call an interaction diagram, because 'system' is used differently by the AP, and I don't want to confuse my students), and the two S's are for sketch. It also is a cry for help when you're using the momentum model.