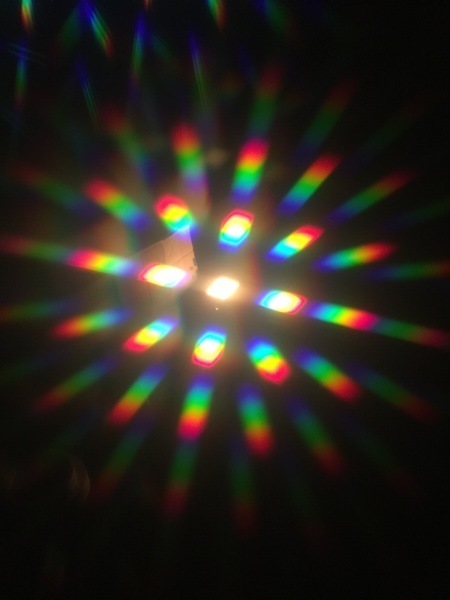 Yes, we played more with diffraction gratings, and we saw great patterns by just using one white light source (see above for three enthusiastic students' pictures of the diffraction). We also played with an electric rotator and strobe light bought long before I ever taught at this school. It's fun to play with persistence of vision. And we did clean up the mess of the back of my room.

But, more importantly, we talked about academic honesty and standards-based grading. Academic honesty is becoming an issue at our school. Students are driven to do well, feel pressure to do well, and will often do almost anything to get a good grade. But, my students said, with my grading system, the focus was on understanding and not doing. I then asked them for help about how I should tweak the grading scale for AP Physics 1 next year, and, with their help, we came up with this outline:

There are four levels, and a student progresses through the levels sequentially.

Level 1: Earned if a student was in class and did the labs and participated in some way in going over the problems

Level 2: Earned by getting a "Quick Quiz" 100% correct. I'll write many versions over the summer. They're designed to be feedback, to see if a student understands the major ideas of the standard.

Level 4: Earned by showing mastery, either through particularly elegant solutions, using the idea over time, or solving difficult problems. This level is the least fleshed out at this point.