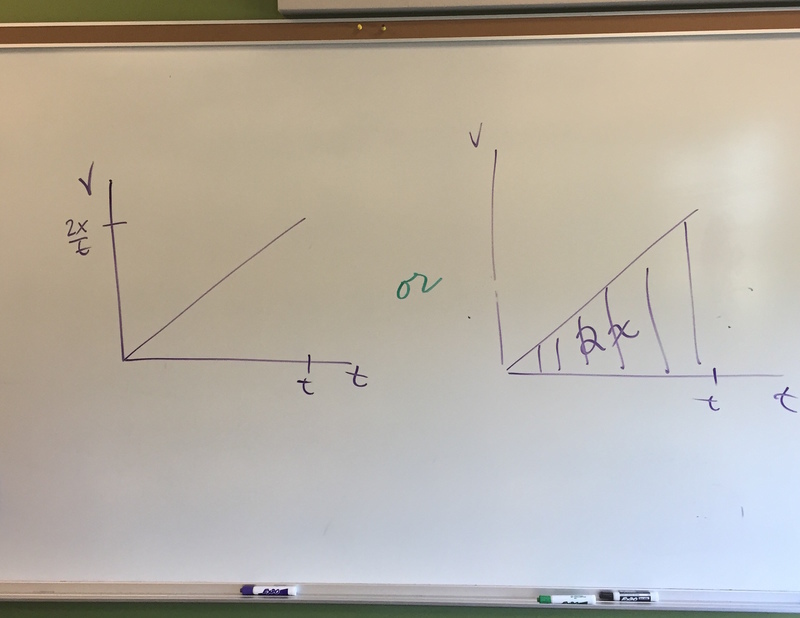 I've been modifying some classic modeling problems to take the numbers out and replace them with variables. I like variables in physics when the students have enough fluency with algebra to then be able to talk about the relationships—what would happen if a increases? How could I change Δx to make t smaller? I also want them to be ready for the AP exams.

The students did a great job with the uniform acceleration problems with numbers. I couldn't stump them with any questions. There was one problem left to do in the packet, one I had modified: what is the acceleration of rocks that start from rest and then travel 2x meters in t seconds?

They struggled. Groups formed and disbanded. And I wanted to butt in. I can't remember my reason, but I bet it was a combination of "it shouldn't take this long," "I know a great hint," and "I can teach something important in very little time if I do this right." I tried to get my class back together as a group, but they fought me.

As they should. They knew the problem. They had the background knowledge. What could I do at that point, with the whole class, that would help? Nothing. I would have shut down the debate too early. I would have taken away their sense of accomplishment and the ability to come to their own realizations that'll stick. I'd stop them thinking like scientists and start them thinking like memorizers. And I realized it as I got their attention. So I tried to say as little as possible. That's what my picture is of today. I showed them the choices that were around the room. (My picture doesn't show the third choice, that these two graphs are saying the same thing.) And I let them work.

After almost everyone was done (one group would not stop debating the two graphs!), not everyone had the right answer. But every student had thought through the thinking both graphs showed. Every student could explain why he or she picked which graph. And while they wanted to defend their answers, they all listened to each other and tried to build on each other's ideas.

What more do I want?

Nothing. I started my teaching career lecturing. The more I taught, the more I gave activities, labs, and experiences, but I still kept giving way too many hints. I kept wanting to teach over their thinking. After Modeling Instruction, I realized their thinking is the most important part. I want to change their thinking, their approach to seeing the physical world. The better I get at my teaching now, the more room I give them for their thinking. (That doesn't mean it's all just their own thinking. I create, with well-planned experiences and problems, a path that the students sometimes don't even realize.)