I went beyond what I planned today, and I ended up with the demonstration you see above. If you take four carts and put them under the four feet of your track, and then crash two carts on top, the track won't move. It doesn't matter if you use magnets, or velcro, or even use the plunger for an explosion. If, though, you put one of the carts on the track upside down, so that now there is friction in your system, the track will move in the direction of the total momentum of your system before the collision. Momentum is conserved, as long as you make your system large enough!

So let me tell you how I got here. I started with this question I wrote, which uses some variables because my student need practice with them: An iron sphere of mass m and velocity vo is attracted to a magnet of equal mass that is initially at rest.  After a time t, the sphere and magnet are attached, and both are traveling at a velocity of vo/4. What was the average net force on the sphere-magnet system during this time?

I ended up with two answers, neatly summarized on these two whiteboards written by two different students: 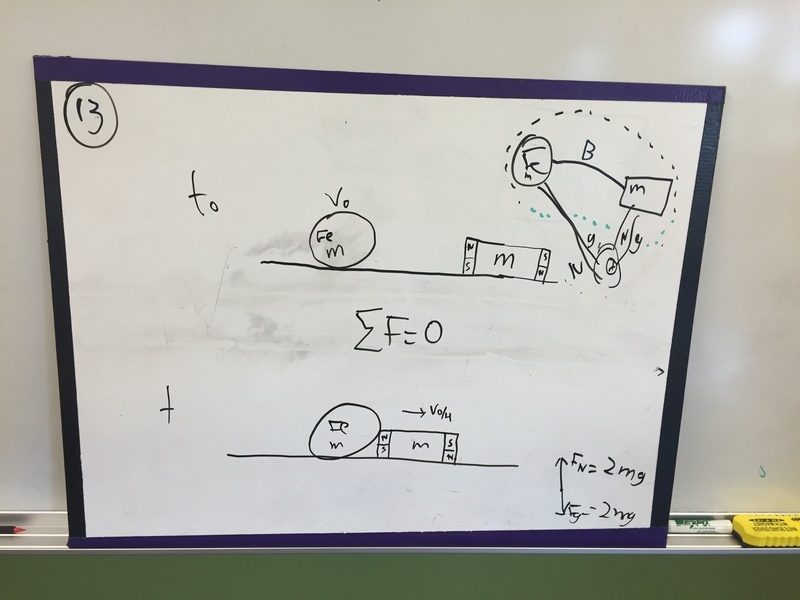 Then someone else in the class piped up. "What about friction?" she asked. "We don't know if this is a frictionless situation or not." After some debate as to whether we could include friction or not, we tried to figure out what would happen in a collision between two objects of the same mass when they stick together after the collision. I showed quickly that the final velocity after the collision would be half the initial velocity. I looked around the room, and it looked like the class didn't believe me.

So I pulled out two carts and a track and a motion detector and in a minute we had a confirmation from the real world. We realized then there must have been an impulse on the system since its momentum must have changed. I said if we expanded the system, though, to include the Earth, the total momentum would be the same. That's when the carts under the track came out and we made the videos in this post.

After discussing this and other problems through whiteboarding, we started a lab with a ballistic pendulum. We'll see results on Monday.