We had great discussions today about different situations where objects are accelerating. They were deep and interesting and in each class, students brought up some great ideas.

I took no pictures, though. I feel like a #teach180 rookie.

So, instead, I'm going to focus on how hard it is to be wrong. Students don't want to put up wrong answers. I had a student today who told me he was worried that other students would judge him for not understanding the material. I talk about how important it is to discuss different ideas. I train students to ask questions rather than just point out flaws.

But I feel like I'm still caught up in the right/wrong paradigm. I don't think I'm pushing the conversation from answer-finding (which is all about right and wrong) to meaning-making (which is all about clarity/connections and confusion/disconnections). I need to work on communicating that to students. Instead of, "what do you like or not like about these boards?" (which is my go-to question about whiteboards and is way too vague), I'm going to try other approaches. My ideas so far:

I'm still thinking about this.

We took our first quiz today about CVPM. But our short lesson today was about the particle in constant velocity particle model.

Mr. Kaar, Mr. Engels, and Ms. Pollack, and I created a unit to explore what "particle" means in CVPM, and how it relates to conservations of quantities in systems. This lesson is the first part of this.

We start with a video of two air pucks connected by balsa wood sliding along the ground. We make sure we know what those air pucks are, and how they seem to move at CVPM. We then learn how to track one air puck. (See awesome gif above. Thanks, gifmaker.me!) Cool, a motion map! That motion map doesn't look like CVPM at all! We look at the position-time graph, and that doesn't look right either. It's way more complicated than a straight line. What should we track? Students usually quickly realize the middle is what we should track. We then do the same thing for three air pucks attached into an equilateral triangle. What should you track now? That's more difficult, because the middle isn't really part of anything. But it still works!

We then give them the two pucks again but this time, when they track the center, it doesn't look right. Why? Because we secretly filmed it on the ramp outside. So that's why the dots on that motion map aren't equally spaced. It seems to be speeding up, which is what we'd expect on a ramp. Guess we'll have to test things on ramps with the motion detectors on Monday... 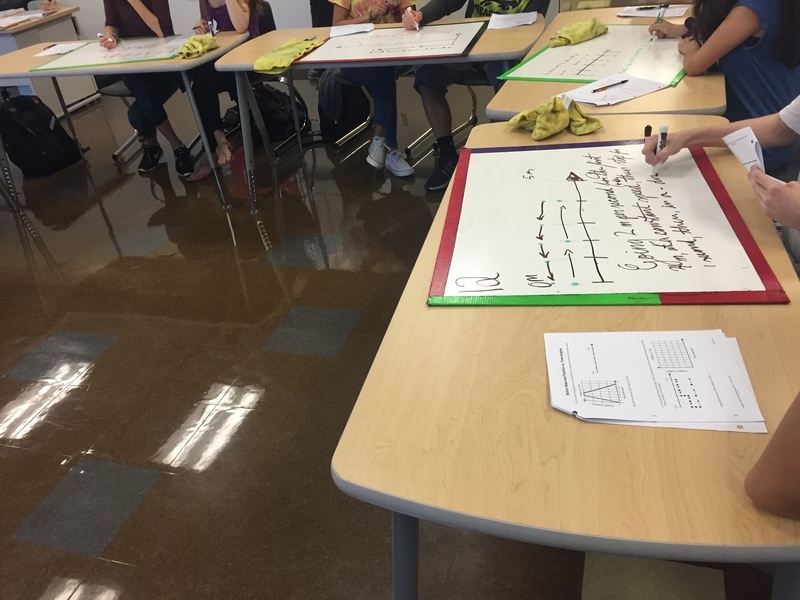 We did physics speed dating (see this blog post by Kelly O'Shea if you want to know more) to tackle the most complicated constant velocity representations we'll do. I have to be careful at this time of the year; I can spend a lot of time making sure their model of constant velocity is perfect, but I don't think it really matters for a few reasons:

Still, even with this leeway, we still have some important discussions: 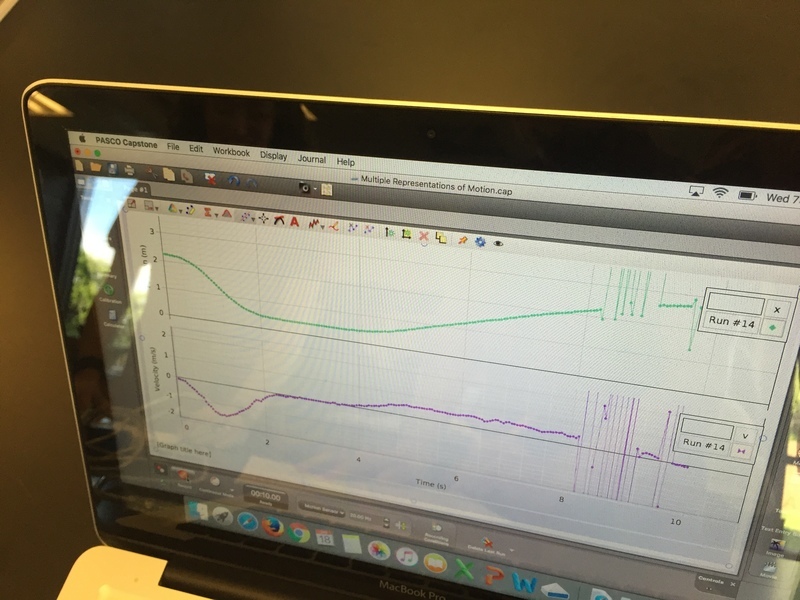 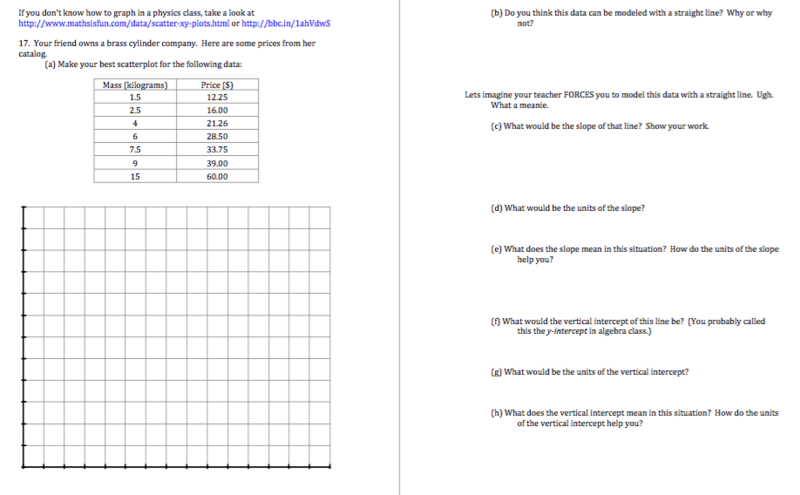 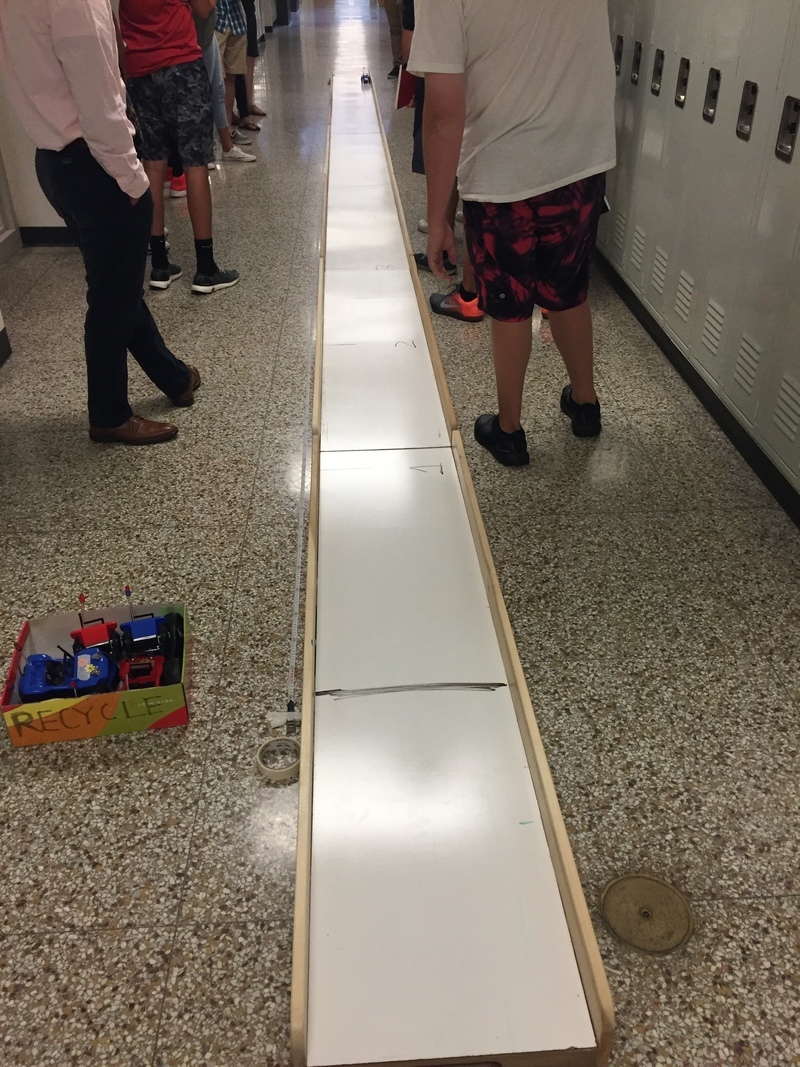 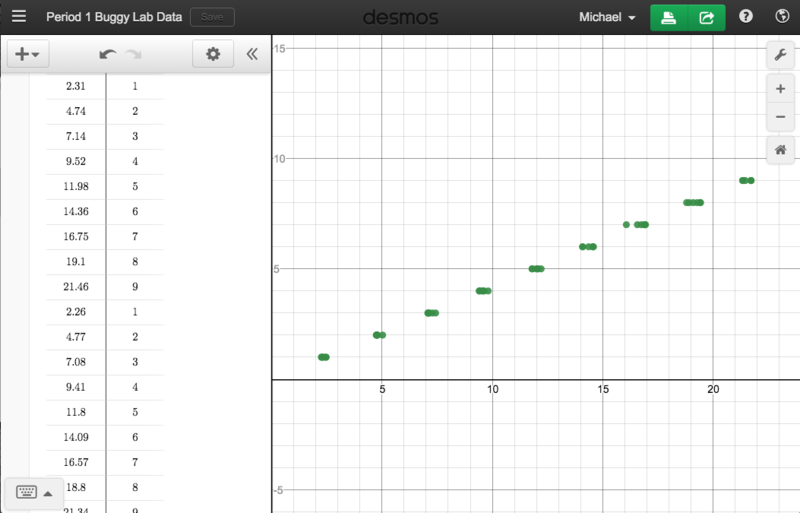 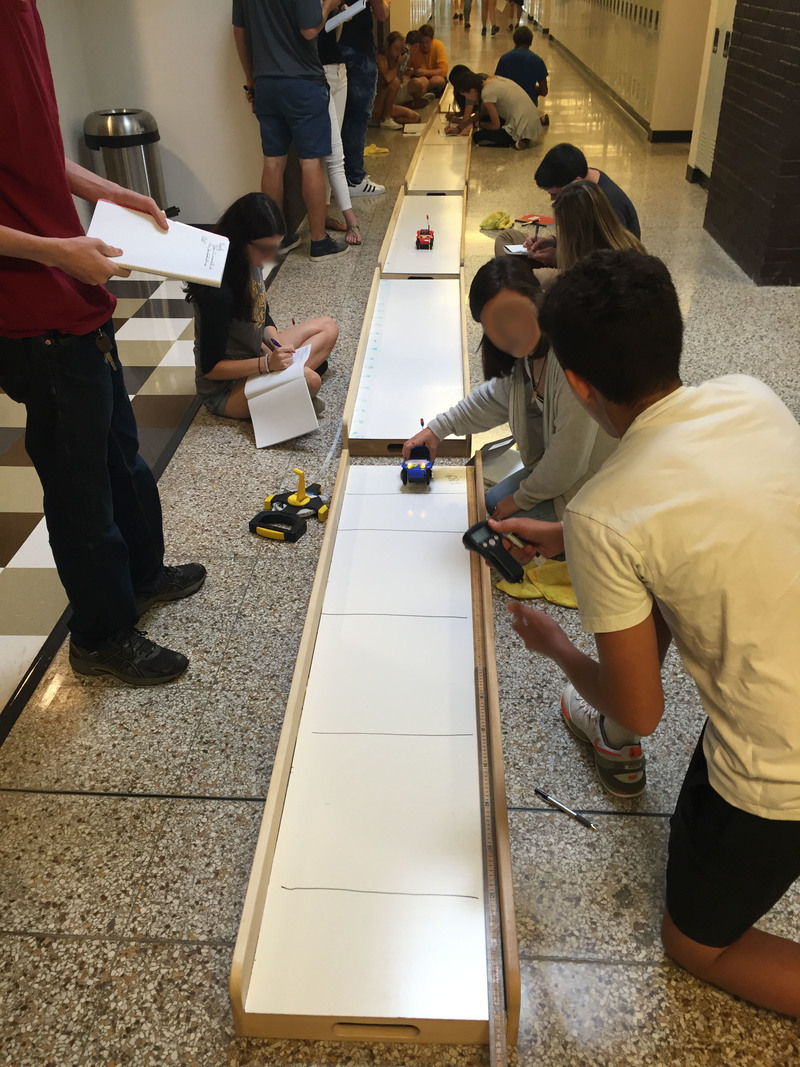 So, last year I blogged my combined AP Physics 1 and 2 class. This year, I'm going to do a #teach180 blog for a AP Physics 1 class. I have a student teacher this year, so I don't know how many days of the teach180 I'll get done this year, but I do want to blog a bit this year.

Today was the first day, and I wanted to get right to the lab. So we started the buggy lab. If you don't know about the buggy lab, Kelly O'Shea has an amazing description. We listed our observations; we figured out we would measure time. I do a lot of this lesson like she does. Thanks, Kelly (as well as Brian Carpenter and Chas Deremer.)

But then, when they wanted to use metersticks, I told them I couldn't find them. All I could find was a long measuring tape. So we could only measure the position of the car on the measuring tape rather than the distance from the start line. I like this move. We start with position this way. I also don't quite set my students up to get position-time graphs on the first lab. I like to see what they get without much guidance. (Also a Brian & Chas move.) When they all whiteboard their information, and see what a graph can do, the class often agrees that graphs are the best way to see all the information quickly. I like the discussion that comes out of this confusion.

I also learned something about the question "Is the buggy moving at a constant speed?" Some student hear that as "Does the buggy do the same thing every time?" rather than "During one time down the track, does it stay at the same speed during that one trial?" I'm not sure how to avoid that confusion. 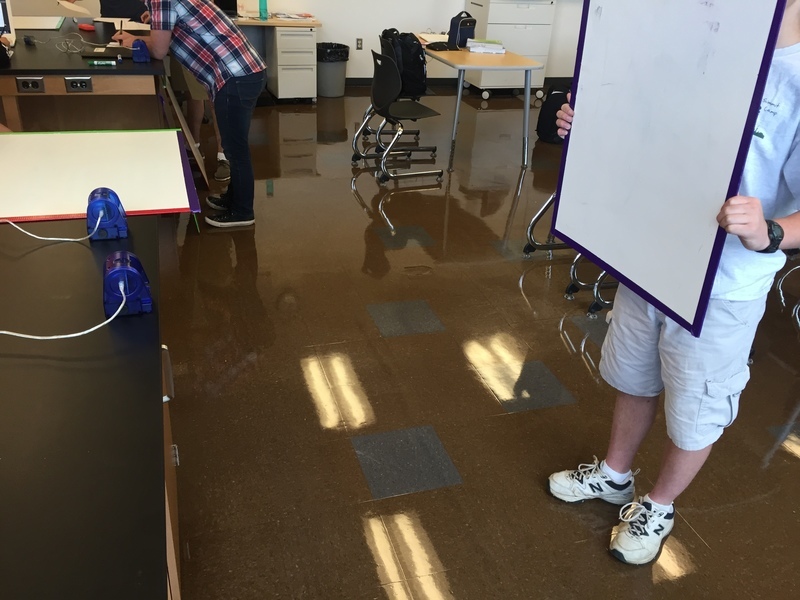 We took a pre-test, went over the (mostly mathematical) summer work, and finished up writing our Constant Velocity Particle Model. We went over the four ways to represent CVPM; motion diagrams, algebraically, with words, and with graphs. I also showed my class this blog. This way at least I'll have a few students in my audience, and maybe they will remind me to take pictures. I took no pictures today.