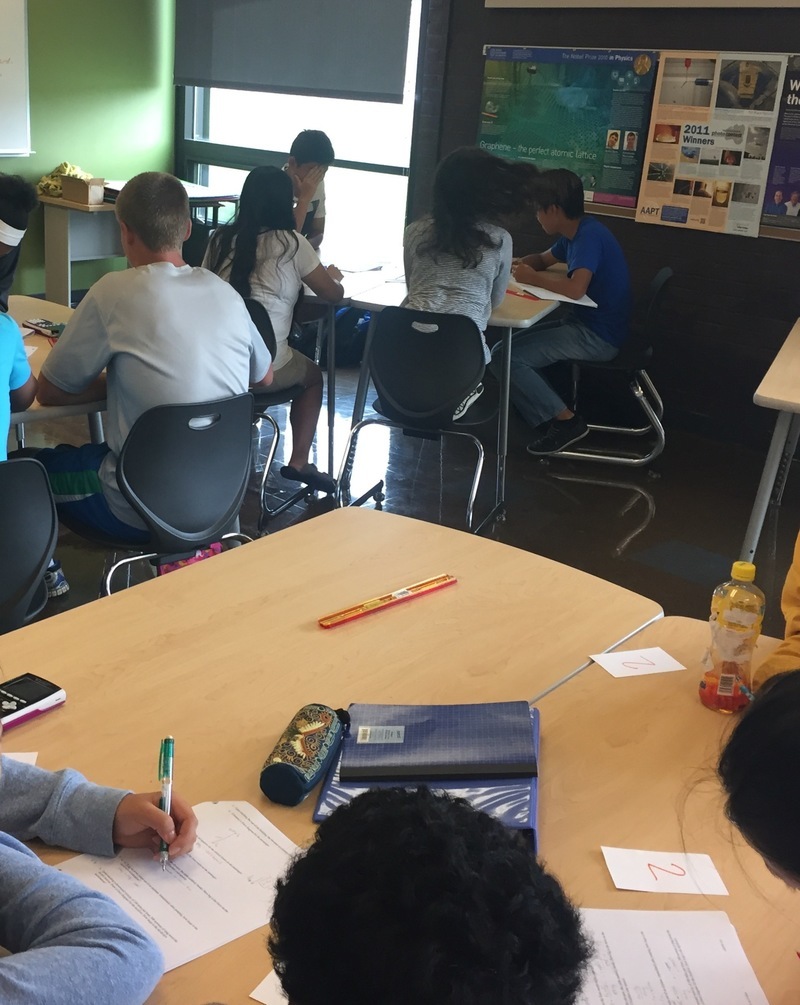 I love Whiteboard Speed Dating. I love the cross-pollination of ideas that it requires. I really like how students have to deal with the whiteboard in front of them, the ideas of their partner, and their own ideas when they switch boards.

We were starting unbalanced forces, and it was time for those elevator problems. You know the ones—the elevator is going down at a constant velocity or the elevator is accelerating upwards at 2.5 m/s².

First, I told the students to get rearrange the tables and get into groups of three or four. I have them two minutes to move the furniture and get into their original groups. (I have a small class—only 14 students. I know, I know.) I think groups of three to five would work the best here. I wanted the groups to be big enough to have students who think in different ways and at different speeds.

Once they were in ready, I told them we were going to do something similar to speed dating. Instead of two people on this date, you're going to have three or four. It's not really a date, then, is it? It's more like a group hang.

You're going to start this next question as a group. Try to figure out how you'd approach it. Draw diagrams and do some math. Don't use whiteboards; just talk through your ideas and write them on your packet. But don't get too comfortable. Just like we we did speed dating, you're going switch. You'll get a whole new group.

So, while they were starting the problem of a person accelerating upwards on an elevator, I started giving each student a card with a number on it. I made sure that, in each group, every person got a different number. I listened in as each group came up with strategy, and noticed how each strategy was a little different.

Very quickly, before any group had really finished coming up with their strategy, I had everyone stand up. All the 1's go to this table now, all the 2's here, and so on. (You can see the all the 2's on one table in the picture above.)

When they got together, they had four different approaches to the problem. Each person in the group was an expert in a different way to solve the problem. Some were more elegant; some were clunky. At least one had a fatal flaw. But it didn't matter. They were expert in an idea that was the group's idea, and their job was to express that idea. The four groups then worked until they came up with an answer. All four groups quickly came to consensus.

I did this four or five times during an hour. It went great. I spent a little time asking for a class consensus about what the positive and negative signs mean in Newton's second law. But all the groups got to the same point at about the same time, and once the groups realized that everyone got the same answer, they felt really confident in their thinking.

This method fixes one of the drawbacks of speed dating. What if the students don't get along? Who decides if the two students have wildly different ideas about what to do next? Is just one person writing on the board? Now, everyone is writing on their own paper. And students can listen to opposing ideas and act like the judge. (I saw that happen more than once.) As one of my students said during this activity: "Speed dating is awkward. Speed group hangs are fun."